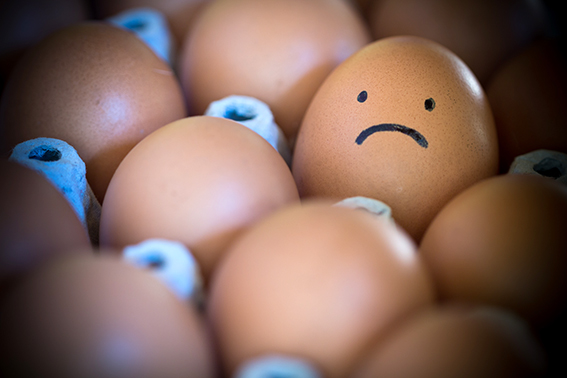 The expression "a curate's egg" originally meant something that is partly good and partly bad, but as a result is entirely ruined. The phrase derives from a cartoon in the humorous British magazine Punch on 9 November 1895. Drawn by George du Maurier and entitled "True Humility", it pictured a timid-looking curate (a low-ranking clergyman) taking breakfast in his bishop's house. The bishop says, "I'm afraid you've got a bad egg, Mr Jones." The curate replies, "Oh, no, my Lord, I assure you that parts of it are excellent!"

This very much describes the state of young people’s health. The good news was that a series of report published this year found that the male youth suicide rate has stabilised, but the female rate has increased by 50% since 2013. Another report found that 1 In 6 adolescents are dissatisfied with their lives and future outlook, 1 In 3 said that acquiring valuable things makes them happy and only 45% had a strong sense of belonging to their community.

A recent report by Orygen, the National Centre for Excellence in Youth Mental Health found 24.4 per cent of young women and 18.1 per cent of young men aged 20-24 have self-injured in their lifetime. They’re astounding statistics and confronting to think about. That’s a nearly quarter of young women and one in five young men. While half of these young people never seek help, the report states that more and more young people are being hospitalised for self harm.
The stats are confronting, with hospitalization rates for deliberate self-harm among young people increased by 43% between 1996 and 2006. The increase was much greater for young women (a 51% increase) than for young men (a 27% increase).
Hospitalization rates for intentional self-harm were more than twice as high for young women than for young men, however young men have a suicide rate almost four times that of young women.

The results beg the question of what would induce a young person to engage in such behaviour, and why this would be on the rise, especially for young women.

Clinical experience suggests that most teenagers who self harm have endured tough times. The beautiful girl in year 10 who had her hair set on fire by a group of ‘mean girls’ and who a few months later began to cut herself, or the girl who’s estranged father died from a brain tumour who following his death, would smash her head against a wall for hours. Others were trying to cope with the pain of physical or sexually abuse, relationship break up, and various problems with family, school or peer groups.

So such self-harm is often used by young people as a way to cope with negative experiences and the strong feelings associated with it. Self-harmers tell me that they do it because it is functional – it serves a purpose and these purposes differ.

Some say that it gives them a way to express difficult feelings such as anger, sadness, grief or hurt. While others, who feel unable to use words instead employ self harm to communicate to people that they need help. Still others say self harm, provide them with a feeling of control, especially when they feel as if other things in their life are out of control.

There is no denying that for young people such self harm can afford them an immediate sense of relief however after a while many realise that it is only a temporary solution. The downside is that it can also cause permanent scarring and nerve damage.

If your son or daughter engages in such behaviour, don’t over react, don’t dismiss or trivialise their reasons but instead focus on alleviating their stress, and getting them to learn to cope without harming themselves, above all get professional help.

As to why this behaviour has increased, take your pick from a combination of growing up in a secular, disconnected society, high levels of separation and divorce, rampant spiritual anorexia, the lack of ritual and tradition, increasing academic pressure, alcohol and drug abuse, early sexualisation of young women, mental health problems and time poor parents who simply are too exhausted to spend time with their children.

I don’t know what the curate or his bishop would make of the fact that 7,000 young people fronted up to hospitals with self harm last year, but it seems that for some young people growing up in Australia, it seems as though their eggs are scrambled.

The question is how many young Australians didn't turn up to the hospital after self harming? If you do a conservative estimate - I reckon you could triple that figure..